Yesterday, I read a fascinating article at NPR.

There is a new study suggests that organic farms grew tomatoes that were 40% smaller (than conventional), BUT were actually significantly higher in vitamin C, sugar and lycopene.

Their reasoning is because organically farmed tomatoes are “stressed-out” more than conventional due to less pesticides. The organic plants are forced to fight off pests naturally; the additional stress equates to additional production of stress-fighting compounds like Vitamin C and Lycopene.

Yes, we need to further investigate this study’s conclusion, but when I was researching tomato hornworms and cabbage worms last summer, many experienced gardeners advised that it was better for the plants to have a few pests because it made them stronger. It does make sense when you really think about it, doesn’t it?

The extra bonus is there’s so much more to a tomato than vitamin C & lycopene, so just think of all the tiny un-known micronutrients that are bursting from a responsibly-farmed tomato. Can’t get that from a lab-created vitamin! 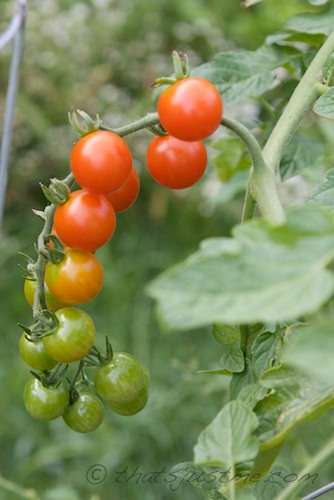