Just received this inspirational quote in my email.

Take care of your body. It’s the only place you have to live.

I wish everyone could realize that their bodies are “temples” to be treasured.

We abuse ourselves with processed crap made by big corporations that only care about profits.

We are destroying our earth and we torture animals for the sake of easy food.

It’s very sad really and it overwhelms me because I do not see us ever wanting to fix it.

I found the quote “Friends don’t let friends buy imported shrimp.” on page 30 of the book “Cooking in the Moment – A Year of Seasonal Recipes” by Andrea Reusing. Those words should be an inspiration to us all!

I adore shrimp! I wish I could eat shrimp more often! But US wild-caught shrimp is expensive, so it should be savored and cherished as a special treat!

I have long refused to buy imported shrimp but it looks like I’m in the minority. Shrimp is the most consumed seafood in the US, but since 80-90% of shrimp is imported from Asia and Mexico, it looks like consumers are either not aware of the dangers or just don’t care.

I always knew there were big health and environmental risks with imported (wild and farmed) seafood, but I just read an older article on the subject and it really hit home.

quote from the article:

Properly run shrimp farms yield up to 445 pounds per acre. Food & Water Watch, which has long studied aquaculture, has documented that many foreign shrimp farm operators densely pack their ponds to produce as much as 89,000 pounds of shrimp per acre.

Oh my Lord, can you imagine the pollution, bacteria and illness this causes?

And then the article goes on to state that less than 2% of imported seafood is actually checked and/or analyzed. And what IS checked has been found to be hazardous to our health.

Consumers blindly trust that if it’s allowed to come into our country, then it must be safe. Consumers expect our government to constantly check and re-check products, whether imported or native, but it’s been proven time and time again that it’s not being done!

When will we wake up!? I am doubtful we will.

It’s the American way to demand lower prices, but look what’s happened to the quality of our food! We need to demand better quality food, but not expect to pay rock bottom prices. We need to start paying a little more, and appreciate the quality of the product! 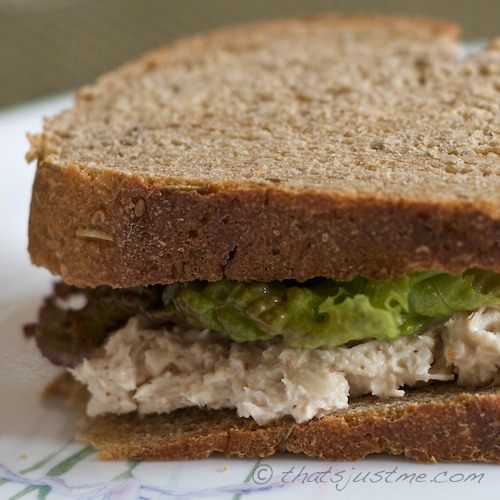 END_OF_DOCUMENT_TOKEN_TO_BE_REPLACED

This Friday, June 10th, Whole Foods Market is having a one-day sale on wild-caught sea scallops! At 9.99/lb it’s a great deal!

I’ve been told that the scallops have been caught just off the coast of Eastern Canada, and are frozen at sea to lock in their flavor. And they’re from a Marine Stewardship Council (MSC)-certified fishery, which can be a plus, although personally, I don’t always trust their judgement. :(

I’ll be shopping for scallops on Friday for sure. I do love scallops, although I don’t eat them very often. I know organizations like the MSC suggest certain seafood choices are sustainable with an abundant supply, but I don’t believe any seafood or meat can be completely sustainable, because there are just too many people eating it! So restraint is needed; scallops are lovely, but should be considered as a wonderful treat, not to be taken for granted.

UPDATE 2011-06-10:
Went to the local Whole Foods market today, and bought about 2.5 pounds of frozen scallops on sale. I loved that they offered them frozen! And they weren’t in a big frozen clump, they were each individually frozen, so you could thaw as little as needed. I transferred them to a freezer bag. Yum! Hopefully if we savor them, they will last all summer long! YUM! 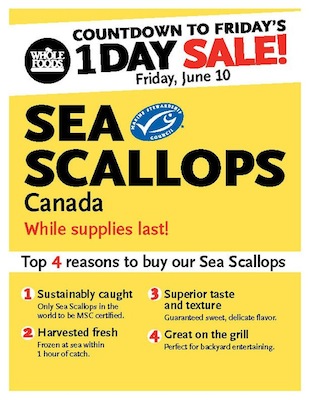