I don’t know if I’m alone in this, but it drives me crazy when chefs/cooks on TV transfer a mixture out of a bowl into a pot, (or vice verse) and they leave behind a whole lotta food in the bowl.

Yes, I realize that due to time constraints, they can’t take the time to scrape the bowl completely, but it bugs me nevertheless. Every time I see it (and it happens a lot), I want to jump into their kitchen, and grab the bowl, take a spatula and scrape out all the contents! Maybe I’m too frugal, but I scrape out just about every last speck of food or liquid. 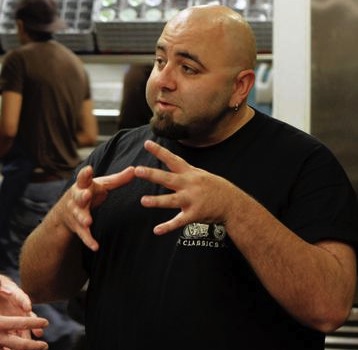 We get comcast cable salesman at the door about once a month, since we switched to Verizon Fios, which is a whole other story :(

Anyway, the doorbell rings this afternoon, and it’s another salesman with his “Comcast logo shirt”, and a clipboard with all the addresses of non-customers.

I immediately wave him off (without opening the door) and he goes on to say that they are going to be doing some work on my street. I shrugged and said that doesn’t have anything to do with me, since we aren’t customers. He said that he just wanted me to know they were doing work.

Huh? He expects me to believe that they came up to my home, not to sell me their service, but to let me know they are going to do work on my street. Come on! They could have easily just left a flyer or something if THAT were really true!

I think he was just sick of hearing people turn him down, he needed to think of an excuse to say for those that refused to listen, just to make it look good.

Wow, there has been a bunch of new cooking/food TV series….not very impressed though.

I watched Rocco’s Dinner Party on Bravo the other night and wow, when did Rocco DiSpirito become so narcissistic and arrogant? Very disappointing. His attitude (down to facial expressions) was incredibly pretentious and snotty – I’ve never watched his “Restaurant” series, but I have heard that he was pompous and arrogant on that show as well. How sad. He was so down-to-earth and unassuming on the old “Melting Pot” cooking show (currently seen on The Cooking Channel) – what a shame he takes himself all too seriously!

Just finished watching the first episode of Extreme Chef (Food Network) on my DVR. Lord, how boring was this show! It’s kind of a cross between Chopped and The Amazing Race, but not as interesting. Why do producers feel that the public wants to watch judges that think they are better than everyone else? It’s getting so old!

I am enjoying the “Next Food Network Star” on Food Network though. Even though the judges are also arrogant and impossible to please. I enjoy most of the contestants, except for bitchy Penny. I can’t imagine who would want to watch a new cooking show hosted by someone so mean spirited. She has a permanent scowl on her face, and is always putting down the other contestants. You know if Giada was a contestant, she’d hate her too! Ha! Yes, I’m sure there are a lot of TV chefs that have bad attitudes behind the scenes, but their actions aren’t usually broadcast on a reality TV series. I just don’t understand her game plan. Be the biggest bitch possible and hope that they will give you a cooking show? She can’t be that stupid, there must be ulterior motives. Perhaps her idol is Tabatha from Tabatha’s Takeover.

I did start watching the 2nd season of Gordan Ramsey’s Master Chef, but I sort of lost interest. We didn’t watch this week, but hopefully maybe next week, we’ll get back into it. Again, pompous arrogant judges that expect perfect outcomes from impossible situations. It’s just frustrating! But I haven’t given up on this show just yet. We’ll see.