My healthy budget goal is to eat seasonal, home-cooked meals while sticking to a $400 monthly budget for all food including groceries, dining out, entertaining, vitamins/supplements, and spices/herbs.

There’s two of us eating 3 (mostly) meals per day. My husband occasionally eats take-out lunch at work, & that $ comes out of his personal cash stash.

Thanks to a lil re-enforcement last week from my budget buddies, I’ve decided, NOT to automatically include the total CSA meat delivery every month. Instead I’ll be applying the meat as it is consumed, which should be easy to track, since I receive a printed invoice from the farm.

This will be a good opportunity to use some of the meat that’s accumulated in my freezer from prior deliveries, and catch up on much-needed pantry purchases. Plus I feel like I’ve been skimping on veggies and fruit.

All in all, I felt good this week, and I am fully confident that I will be able to stick to my budget. I wish I could say that I’d even be under budget, but my pantry still needs some replenishing, so for next few weeks, I’ll probably spend every available penny! :)

I had a big cook weekend to replenish the freezer. Friday, I threw one of my organic chickens into the crockpot, and it was fall-off-the-bone scrumptious. Saturday – I had a beef chuck roast in the electric slow cooker and a pork butt roast in the oven. I froze 5 small packs of meat for future meals. Sunday, I made my free veggie/chicken stock using the bones from the crockpot chicken and my saved freezer veg scrapes. I then made a huge batch of chicken soup, enough to freeze 3 quart containers, plus extra for dinner and lunches.

It still amazes me how much I’ve learned (and continue to learn) in just a few months by participating in the Project Food Budget! It’s never too late to join us!

If you’d like to participate, get the details and let Emily know you’re on board!

Here’s who else is budgeting this week:

My sweet niece is having her first baby within a couple of weeks. I know as new parents, they are not going to have a lot of time (and energy) to cook healthy meals for themselves, so I am taking this weekend to cook up big batches of food to freeze for them.

Yesterday, I went shopping and purchased most of what I needed.

So, yesterday afternoon I got started on the chicken soup and white rice.

The soup turned out very well. I sauteed onions, celery, carrots, (and from my fridge,) zucchini and a couple chopped radishes in my new 7 qt Staub cast iron pot (oh have I mentioned I absolutely ADORE this pot!) and then I added some fresh tomato chunks, and both cartons of chicken broth, along with the bone-in chicken breast and tons of dried herbs and a little turmeric. Simmered it on the stove for over an hour, and it was done.

I divided the chicken into two 1-gallon freezer bags along with a hefty portion of soup. I filled one more bag with just the soup (no chicken) with instructions to add a cooked Perdue chicken breast if needed.

The rice didn’t fair as well. I decided to try Lucinda Scala Quinn’s suggestion of a 1 to 1.5 ratio when cooking white rice.

In my 4 qt Staub pot, I poured 3 cups water and added 2 cups of rice and some salt. I was a little distracted, and made the mistake of leaving it for a couple of minutes, and then stirring the rice. You’re not supposed to stir rice while cooking, but there was still a big mound of rice rising out of the water. When the liquid was cooked out, I took it off heat, and allowed it to “steam” like I always do. Well, when I tasted it afterward, there were “crunchy” parts. Oh no!

My biggest mistake I think, looking back in hindsight was using such a large pot. The water wasn’t filled enough over the top of the rice and I think it evaporated too quickly. Then I left the pot with the rice still mounded up over the water for a few minutes and stirred it!

I tried to fix my mistake today by re-cooking the rice (same pot) but adding about 1.5 cups more water. I allowed it to cook until the water evaporated and then I took off heat to allow it to steam. I like steaming rice after cooking, as it allows any “stuck” on bits at the bottom to soften and lift from the pot. Makes it easier to clean and it make the rice fluffy!

So, I think the rice is saved! I packed it into 3 quart sized freezer bags.

Oh and a bit of advice about freezing. I know my niece doesn’t have a large freezer, so I wanted to make the food as compact as possible. I am freezing everything flat on a large cookie sheet, so she won’t have to worry about too much bulk.

Today’s cooking started out with braised beef, and ended with some tasty tomato sauce. In between I made her a loaf of homemade bread.

For the braised beef, I used my wonderful 7 quart Staub again (I can’t believe how useful this pot is!) and I browned the beef. Starting with the taller roast chunk, I browned all 4 sides, then I transferred onto a plate. I browned the larger flatter 7-bone “roast” (it’s not really a roast, it’s more like a chuck steak, but then I suppose shoppers might confuse it for a real steak and try to grill it, not braise it) on top and bottom. Oh and I generously salted and peppered all sides of the roasts as I was flipping.

Once the 7-bone was browned, I transferred that to the dish as well, then tossed in 5 large-chopped onions and a little bit of juice from one can of tomatoes. Using a wooden spoon (I NEVER use metal in my beloved enameled cast iron) I scraped up some of the delicious flavor bits stuck to the bottom of the pot.

I allowed the onions to cook for a few minutes, covered, then added some cheap red wine, scraping up more flavor bits at the bottom, making sure they were all found. I arranged each piece of meat back into the pot, then poured the rest of the canned tomatoes and more wine on top. Covered and cooked for about 5 hours. I checked on it once after 3 hours.

When it was tender and falling apart, I removed the meat from pot to a large platter to cool. What was left in the pot was scrumptious, so I figured it would be a great base for tomato sauce, which I could then make into chili later.

So, I poured 4 cans of tomatoes into the pot, along with what I thought was some mild Poblano chili peppers – ouch. My fingers are still stinging from chopping them. I usually wear gloves while chopping hot chiles, but since Poblanos are known to be very mild, I didn’t. Thankfully I tasted a small piece before putting too many into the pot. It was powerfully hot! So, I chopped the rest to freeze in a quart freezer bag for them to use in future recipes. I only added about a half a chili, figuring I can add more later.

In the meantime, I started to shred the beef and transfer the pieces to a glass storage container, making sure to keep out any gross fat pieces. The large chuck roast didn’t have much fat to remove, but the 7-bone had a bit.

I’ll keep the meat in the fridge overnight and pack it into freezer bags tomorrow, along with maybe starting on a batch of chili with beans, and the rest of the carrots and kale.

And so, all in all, it was a productive day…Yes, my fingers are still stinging and tingling from the chili oils, and I have two small burns on my arm. One from the beef splattering up at me trying to take it out of the pot, and once when I touched the top of the oven while taking the pot out of the oven. Boy, that pot is a heavy one too. But I love cast iron for muscles! Who needs a gym when you can lift heavy pots!

Anyway, it was a good cooking day! Tomorrow, I’ll probably make her some blueberry muffins, and get the tomato sauce and beef into freezer bags.

I was thinking I’d also like to make her a small batch of quinoa. We’ll see.

Sunday is a great day to cook ahead for the week (and beyond). Today I’m slow cooking two big pieces of yummy meat:

I was hoping to be able to roast one of the small organic chickens I bought Friday at Whole Foods (on sale @1.69/lb) but there is absolutely no room in that oven. So, the chicken will have to wait until tomorrow, or hmm, depending on when the meat is finished, I might just throw it into the oven tonight.

UPDATE: beef was finished cooking first. I baked some rice and steamed beets & carrots and we ate a delicious dinner. There is enough beef for lunch tomorrow as well as a chili or pasta sauce recipe. 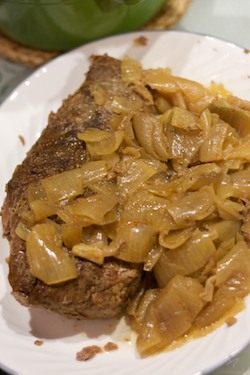 Pork is still cooking. I’m almost intimidated to take it out. I hope it tastes good. I mean how bad could it really be? Hmm if it’s good, it could be our lunch tomorrow and I’ll freeze the beef.

UPDATE #2: Oh wow, the pork came out of the oven, and the fat was all crackling and crunchy. Broke off a couple of chunks, and oh oh yum. I allowed it to rest for an hour or so, and then I took it apart in chunks. Some of it was kind of tough and fibrous. I froze the bone with some tough meat attached for a soup starter. There is enough pork for at least three meals for the two of us, plus the bone for soup! 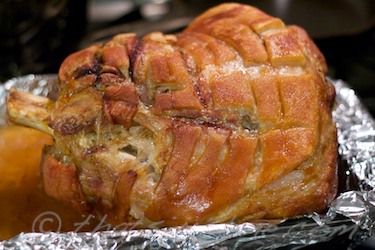 Today was another plan ahead cooking day!

It’s been very busy at work, so time is limited for cooking healthy meals. I don’t want to revert to my old ways of “convenience” processed food and take-out, so I have been using my slow cooker (crock pot) a couple of days a week. It’s been a great time saver, but I was recently reminded about the crock pot/slow cooker lead problem. So, I am trying NOT to use it until I perhaps test the crock with a home lead test.

So, today in the oven: