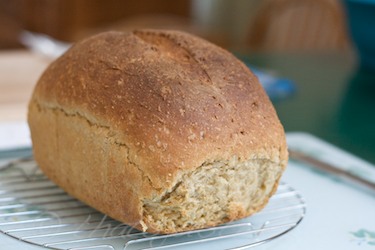 I love experimenting with cold fermentation for developing flavorful bread dough. I started a new (for me) bread experiment yesterday, based on the technique of Peter Reinhart’s book “Whole Grain Breads: New Techniques, Extraordinary Flavor“. In the book, Peter advises to mix both a mash and a biga, refrigerate for at least 12 hours, then mix up a new dough with the two plus a small amount of ingredients.

I decided that I would try mixing one biga mash together with no sugar, oil, salt and just a touch of instant yeast, refrigerate for a day, then mix up a new dough using the biga mash with new flour and ingredients.

The result was a fair success! A yummy fluffy high rising whole grain bread. I love a hearty dense loaf, but sometimes you just want bread to be light and airy!

I still need to work on this technique though, although the taste is fantastic, the “crumb” is usually too crumbly and the top crust pulls away. By the time I get to the middle/end of the loaf, it’s usually difficult to slice thinly. I think it might be an issue of not shaping my loaf properly, or it could be over-proofing (final rise). I don’t think it’s an issue of too much milk and/or oil but maybe my dough needs more water. It’s also possible that I am not kneading long enough, but that seems hard to believe since I’m using a machine for the final dough. I’ll have to do some additional reading on the Fresh Loaf web site, and maybe re-read Peter’s book. There is still so much to learn! 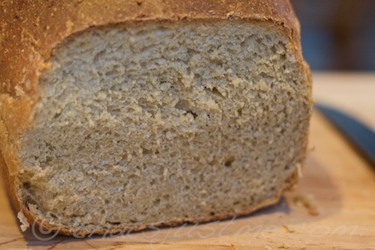 Anyway, here is my process.

It only take a few minutes to mix up the biga soaker dough.

Note: I use the West Bend 41300 Hi-Rise Electronic Dual-Blade Breadmaker for all kneading.

NO salt, oil, sugar just yet

It’s possible to process the bread dough using the “dough” setting, but you should NOT allow it to rise the bread. Shut off the machine after the kneading process finishes, and remove the dough before the warm rise step.

Here’s what I did:

Take the dough out of fridge, allow to warm up for at least two hours.
Chop up dough into several smaller pieces, using pastry scraper or sharp knife.
In bread machine pan, add dough pieces with the following ingredients: 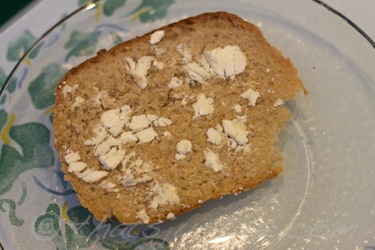 I’ve been experimenting with bread dough, and have found that a long slow fermentation makes the most flavorful, delicious bread! I experimented with my own recipe, but wanted to keep exploring.

I’m really not into hand kneading, even when authors say how easy it is. I have no patience for it, even if it’s only for a few minutes. I use my bread maker and I am very happy with it! I started with a one paddle Breadman, and recently purchased a West Bend 41300 Hi-Rise double paddle breadmaker, which I absolutely love!

Anyway, my first crack at his recipes (Multigrain Stuan recipe – page 102) was a semi-disaster, but I was so proud and happy to finally be working with a soaker and biga! Whoo hoo!

My second try at the same recipe was better. My soaker consisted of random amounts of cornmeal, barley wheat, wheat germ, oat bran, and wheat bran. The cornmeal gave it a pleasant texture.

Next, I tried the Transitional Whole Wheat sandwich bread recipe (page 99) and yum, it really turned out well.
Just look at the oven spring! 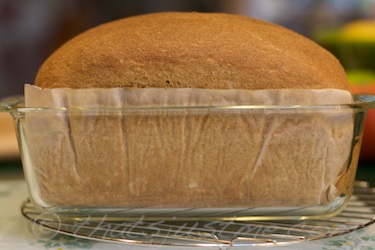 END_OF_DOCUMENT_TOKEN_TO_BE_REPLACED

Well it was my first try at a soaker and biga. Whoo hoo!

I followed the Multigrain Stuan recipe on page 102. Actually I shouldn’t even be calling them recipes, (thanks Pen!) they are actually called “formulas”

I started out very well. I added a whole mess o’ grains and flours to the soaker. I mixed a combination of corn meal, barley flour, wheat bran, oat bran, oatmeal, and rye flour, added the salt, whole wheat flour, powder buttermilk and water. I kept it on the counter until this morning.

The Biga was just as easy to mix. I used my bread machine, and mixed the whole wheat, instant yeast and water. Shaped it into a ball, and allowed it to rest in the refrigerator until this morning.

This morning, I warmed up the Biga for a couple of hours, then, along with the grain soaker, I cut it up into smaller chunks with my pastry cutter.

This is where I went astray. I mistakenly read the wrong section on the page, and thought there was 3/4 cup of liquid. oops. That was the Biga! So, for the final dough, I poured water and the rest of the ingredients into my bread machine and let it knead. Hmm, it looked awfully soupy and that’s when I realized my mistake! Ugh!

I had to add a ton more flour, I kept adding and adding until it finally looked normal. I figured since it was so messed up, I better allow the machine to go through its paces. I kneaded for 10, then rested for 20, then kneaded again for 10.

Then I removed the dough and let it rise in a bowl near our wood stove for about 60 minutes. There was really a lot of dough, so I figured it might work better as two loaves; I divided the dough with my pastry cutter, and shaped into loaves.

After baking and cooling, I started slicing for tomorrow’s lunch sandwiches. Eh, not so good. The crust came apart from the crumb. Oh well. I had a few bites of crust, and it was surprisingly alright, considering the salt and sugar flavor was diluted from all the extra flour.

I’m not giving up, and will definitely try again. It was a great learning experience, and a mistake that I will probably not repeat again! haaha!