I wanted to share some of the photos I took of my little veggie garden. It started off smaller, then expanded, and expanded.

For now, I’m posting wide angles, but soon, I’ll share more detailed photos to show the growth of each plant.

Last season, we started with a very small patch of garden, as you can see from notes on two photos. Our first expansion was adding a few more feet next to the fence, and another row with a pathway.

Here’s what it looked like on 5/24 (with notations for last season).

Oh and we also have grape vines in the fence corner, and another vine in the middle area of the fence. 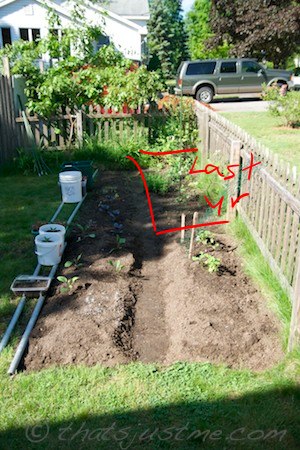 The containers were placed on top of long metal fence posts to allow good drainage. 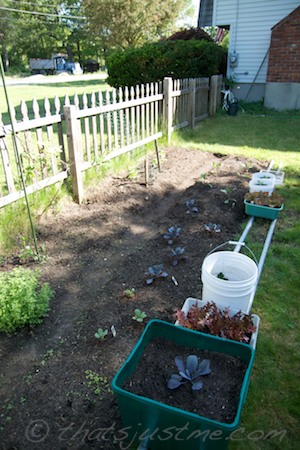 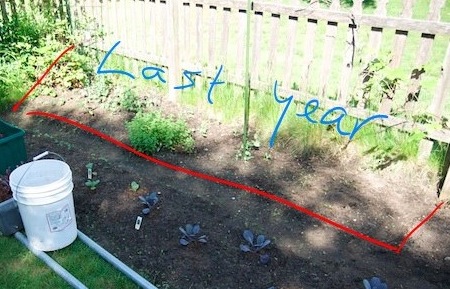 By 5/31, we needed more room, so we added a wider row with room for sweet 100 cherry tomatoes, unmarked tomatoes (I think they are Mountain Spring), carmen red peppers and jalepeno peppers. 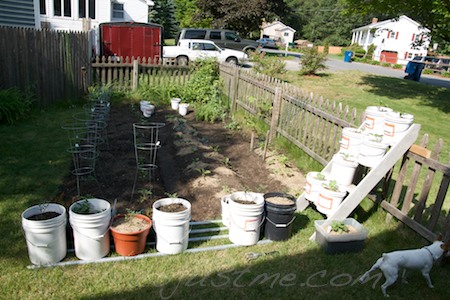 I planted the rest of my pickling cucumbers next to the fence and added containers of bell peppers, Sungold cherry tomatoes, Sweet 100 cherry tomatoes, butternut squash, along with the previously planted ones were situated at the top part of the garden; we also added a ladder/shelf, which we originally thought was a good idea (keep reading). There were also four containers of bell peppers set in the pathways of the garden as well (another good idea, gone bad) 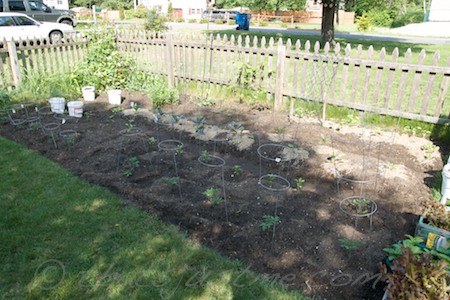 Across the grass, against the house, there are several large recycling bins for tomatoes, bell peppers & red cabbage. On the far left, you can see DH’s lonely Sugar Baby watermelon plant! 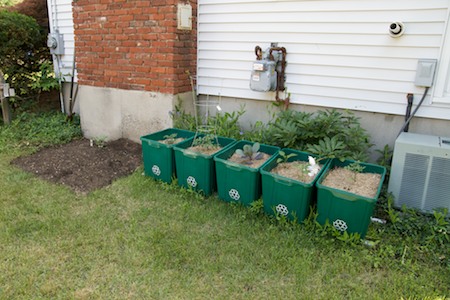 By 6/12, I planted more containers, which found homes in the back of the house. Basil, lettuce, tomatoes. 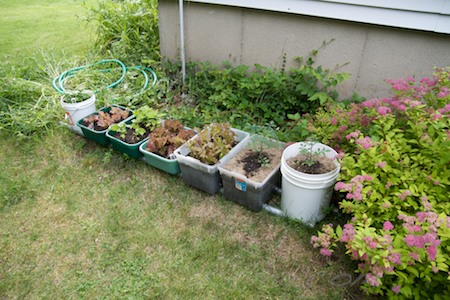 Then a row of bell peppers & (1) butternut squash, with room for DH’s 2nd watermelon and sunflower plants, some beet seedlings, more bell peppers, and peas shoots. 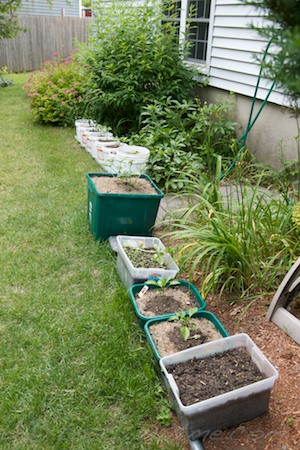 After many modifications, I think we finally committed (more or less) to the final placement of our garden. I found that the ladder/shelf wasn’t allowing good drainage, so I removed it; I also moved the four containers of pepper plants from the garden pathways for better drainage. I might have to move the potato plant one or two more times, as it is growing like crazy, overshadowing everything in its way. 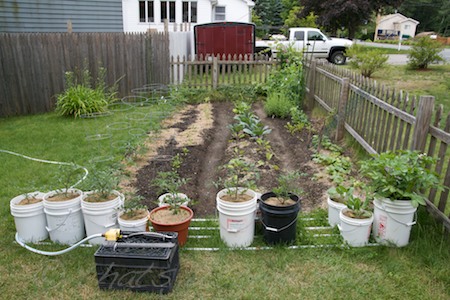 The plants in the large recycling bins are thriving, except for the bell peppers. :( The tomatoes and red cabbage almost seem to be growing better than what’s in the ground! 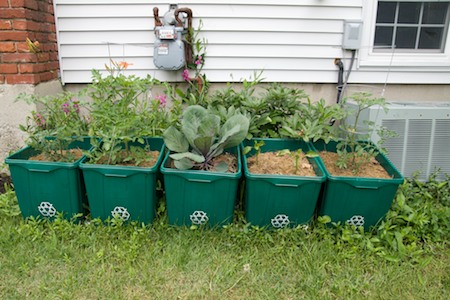 The lettuce is thriving, I’ve already snipped off two batches. It’s growing very well, and I plan on cutting more leaves this week. Fingers crossed, critters don’t make a meal out of it! For some reason, I am not a good basil grower. I did read a tip online about how and where to pinch off the stems, so I’m hoping that helps. 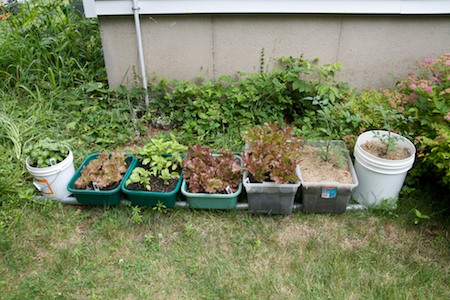 Most of my bell pepper plants are not fairing well, so I moved some away from the main garden, with the rest of the peppers, to see if I can regulate the water better. I think a few won’t make it. :( both butternuts are doing well, but the one by the main garden is larger. 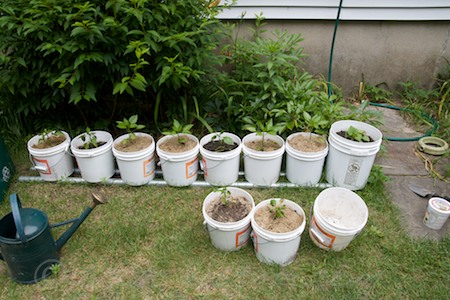 The watermelon growing in the large recycling container is growing well so far, DH has to transplant the sunflower soon. My beet greens are popping up; I am growing them in an old salad mix plastic container. As with the other bell peppers, these aren’t doing so well either. But my pea shoots are shooting up so quickly, I’m thrilled. I hope to use them for their stems and leaves. 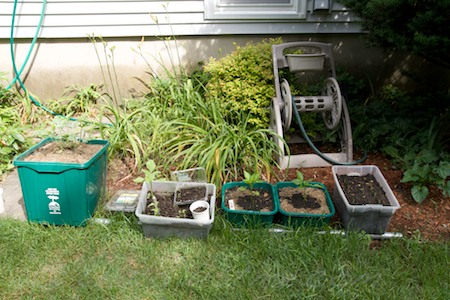 So that is it, my garden for 2012! It’s been a lot of work, but so rewarding. I’ve learned so much about gardening, including growing conditions and pests. I’ve still got so much more to learn, but I’ll get there! Life is good!