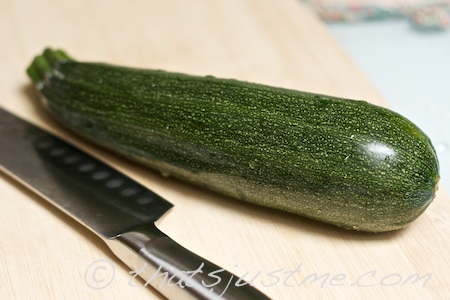 For a first try, they were very tasty, and they smelled heavenly while cooking. DH even thought they tasted good, and he is not a zucchini fan!

Unfortunately, I did mess up and the outer layer of the pancakes was too dark. Not overcooked, because the interior was cooked just right, but the outside was on the verge of being burnt.

I have a feeling my problem was that the mix was too liquidy; it was very hard to keep formed and I had a difficult time flipping them. The iPhone app recipe didn’t mention draining, but I think it’s an abridged copy of the book. ;)

Even though I did try to drain, I should have used paper towels to really reduce the extra moisture. I also think next time I might process some fresh bread crumbs before I grate the onions and zucchini.

Recipe makes 2 servings or 5-6 pancakes.
Inspired by Mark Bittman’s Zucchini Pancakes recipe from How to Cook Everything

I am definitely cooking these again, especially since rumor has it, summer squash is on the CSA share list again this week! Yay! 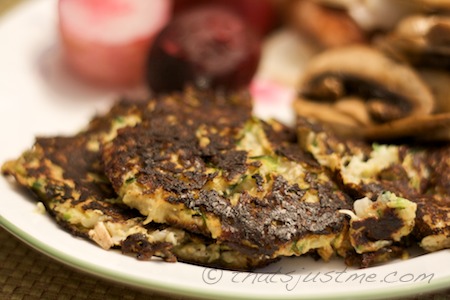 We found an old rusted Wagner cast iron skillet at a yard sale this weekend; DH sanded down the thin layer of rust and I seasoned with olive oil for a few hours in the oven.

I “christened” the skillet last night with another batch of zucchini onion pancakes – with some chopped garlic scapes. This batch came out better than the first one. I made sure to squeeze out a good amount of liquid from the squash before. They still were a little bit too “browned” but they were soo tasty! 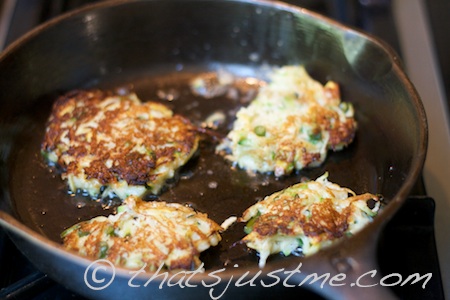