Yeah, these books get you thinking in the right direction (and they did help me initially), but truthfully, they are really just about eating better-quality junk food; at the end of the day, it’s still junk food.

The original ETNT book was published in late 2007, and since then, the authors/publishers have cultivated this “brand” into a huge franchise, publishing new, updated versions every year, and coming up with more titles, such as “Drink This, Not That” and their “Restaurant Survival Guide.” According to wikipedia, as of Sept, 2011, they’ve sold more than 8 million books! 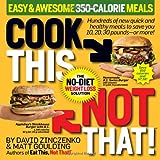 Cook This, Not That

I was curious about the “Cook This, Not That – 350 Calorie Meals” version, so I borrowed it from the library.

As expected, it was true to the franchise formula, offering recipes to home-cook a restaurant-style dish (eat this,) while claiming they could save the reader money and calories compared to the restaurant counterpart (not that.)

Big problem though. I found some, if not most, of the book examples weren’t fair comparisons.

For example, lasagna rolls (page 196) compares itself to Olive Garden’s Lasagna Rollata al Forno. The recipe calls for 6 oz of long thin lasagna noodles, to make a 6 serving recipe. That’s only 1 oz of pasta for each person, calculating a total of 380 calories for each serving.

Come on! Do they really think we’re going to be satisfied with only one serving? Compared to the size of the Olive Garden plate, I would venture a guess that you’d need at least TWO (or more) servings, totaling 760+, coming a lot closer to the Olive Garden’s 1170 calorie plate.

A second example, the California Pizza Kitchen Original BBQ Chicken Pizza (page 180) is calculated at 1136 calories for a whole pizza (web site states current calories are less at 1055). The recipe makes 2 pizzas divided into 4 servings, at 380 calories for half pizza. How is that fair? Eating the whole homemade pizza brings the calories up to 760. A little sneaky and misleading that they’re not comparing apples to apples and pizzas to pizzas!

Most recipes were pushed down to the 350 calorie mark, but don’t be fooled, because in order to reduce calories, they weren’t giving you complete meals. Most so-called meals were only proteins. No carbs, no vegetables.

For Example, 360 calories for Chicken Pizzaioli (page 222) is compared to 1090 calories for the Olive Garden’s Chicken Parmigiana. Well, they kind of left out the fact that their version gives you a much smaller portion of chicken and doesn’t include any pasta, so in reality, it’s really not such a mind-blowing difference, is it?

Same with Herb Roasted Turkey Breast (page 228) compared to Bob Evans Turkey and Dressing. The recipe just calculates the turkey at 140 calories, but remove the dressing and gravy from the Bob Evans plate, and I bet it comes in just about equally. Very sneaky!

Don’t Waste Your Time and Money on this Book

Don’t waste your time with “Cook This, Not That – 350 Calorie Meals“, you’ll only be disappointed; their low 350 calorie meals are unbalanced and incomplete. They will not fill you up, and you’ll be searching for something else to eat, adding more calories to your daily total.

When you need a special treat, isn’t it better to splurge on something decadent? No, living a healthy lifestyle shouldn’t include a visit to the Olive Garden or Wendy’s very often, but sometimes you just want a good plate of junk food from a chain restaurant. Don’t worry about calories for ONE crazy treat meal, just enjoy and savor it while it lasts! :)

Recommendations Instead of This Book

If you need help to cook healthy, satisfying meals at home, borrow a Jamie Oliver book from the library; I especially love to recommend Cook With Jamie.

There are also countless amounts of instructional cooking videos on youtube, and even many cooking podcasts on iTunes.

These are all much better choices than anything offered from the Eat This, Not That franchise. Good luck!

Disclaimer:
I love reading cookbooks, like some people love reading novels! I am inspired by recipes, and enjoy learning ideas from cookbooks, which means I’d rather put my own spin on a recipe than follow it exactly. Please keep in mind that my opinions might be completely different from the other home cooks.