(NOTE: I also wrote a review for the 2011 CSA Season with Farmer Dave’s)

I was so excited to join the CSA (Community Supported Agriculture) at Farmer Dave’s this season. 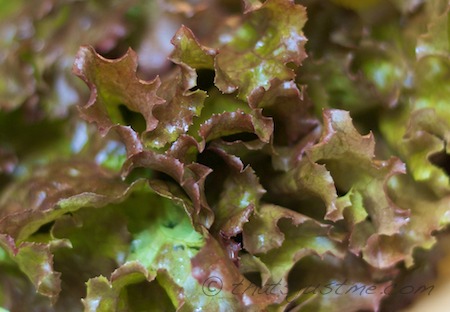 So, what is a CSA anyway? Here’s a great explanation, but in my own words, you the consumer are prepaying for a “share” of the future growing season’s bounty. You pay in the winter/spring before the season starts, and in return, each week during the spring/summer/fall, you receive a generous portion of produce. There’s no further expense unless you want to purchase extra food. Both the consumer and the farmer benefits, so it’s a win-win situation! Granted, you are definitely taking a chance. If the growing season is poor, then your share will be smaller. But on the flip-side, if the growing season prospers, so will your share!

There are several share options ranging from Small Vegetable (1-2 people) to Super Family Vegetable. There are also Fruit shares, plus Winter Vegetable shares.

Since there are just two of us, we opted for the “small share” which was $300. There is also a $50 annual CSA membership fee, plus depending on your location, there could be a $50 “Delivery Fee”. (Note: 2011 prices are a smidge bit higher and they rolled the membership fee into the cost of the share. 2011 small share is $375 plus $50 delivery fee if applicable.)

All locations offer the option for the boxed pick-up, where the farm staff pre-packs your vegetables into a crate, and it’s ready for you to easily pick up. Our location offered a “Choose Your Own” option, which I loved. The customer is allowed to pick and choose the produce. There were sometimes straight picks, like 2 tomatoes, and there were also “choices” offered, like choose between turnips or beets. There was also a “trade” box offered where you could trade a vegetable for another you liked better. I always looked for beets in the trade box!

Check out the video Farmer Dave’s created that explains the “Choose Your Own” option. (Not all locations offer this option)

So onto the details of my CSA experience.

First off, let me say that the staff at Farmer Dave’s is outstanding. They are always cheerful, helpful, and friendly. They work extremely hard and each week, the pickup is managed with professionalism and perfect organization!

I found great tips from other CSA members over at Farmer Dave’s profile on Facebook. One tip that stands out, was a shared youtube video on how to wash and store lettuce. It was a lifesaver (and time saver) for storing lettuce for many days, while camping in the RV. I didn’t wash in the sink, as the video suggested, but I did roll in paper towels and store in plastic bags and it stayed very fresh!

Health: It was so easy to eat healthy when fresh local produce was arriving to your kitchen every week!

Knowledge: Each week, I learned something new about a nutritious vegetable. Whether it was from the weekly newsletter from Farmer Dave, or from a google search, there was always something to learn. My mind was opened to unique vegetables like Garlic Scapes, Kohlrabi, Tatsoi, and Kousa Squash. It also opened my tastes to unique flavors. Vegetables I’ve never tried or enjoyed before, like turnips and radishes.

I also learned so much more about “seasonal” eating, discovering the growing patterns of vegetables and fruit. I also discovered that my body craves food seasonally. Salads in spring/summer, soups in fall/winter. Blueberries in summer, butternut squash in the fall. If you allow it, your body will tell you what it needs, and it makes sense (and cents $) to eat that way!

Joy: It was exciting to arrange the week’s share on my counter to reflect on the contents, and take a photo to preserve it! I felt like I was doing the best for my family. I enjoyed preparing my meals and tried a lot of new techniques and recipes.

Overwhelming Pressure: haha! I learned quickly that my kitchen counter and refrigerator produce drawers needed to be empty (or close to empty) to prepare for my weekly pickup. The food share for 2010 was massive! Wow! I was truly overwhelmed with the amount of food each week. I didn’t really understand the benefit of “blanching and freezing” until later weeks, and next season, I will definitely take better care to preserve the freshness. I tried so hard not to throw anything away, but I admit, there were some weeks that I just couldn’t cook it quickly enough and possibly some nutrition was lost. But for the most part, produce is very hardy, so it lasts in your fridge!

In the initial weeks, we got massive amounts of lettuce. haha, I confess I was getting sick of salads quickly! But it started to taper off as the weeks went forward.

Compared to the organic offerings at Whole Foods, Farmer Dave gave us much larger heads of greens and the farm’s regular prices for greens were cheaper than Whole Foods too.

Read on to find out what we received each week! Keep in mind, I had a “small share”. The larger shares received at least double the amounts, and depending on the pick up location, the variety could be slightly different.

red leaf lettuce, garlic scapes, green peas (assorted including snap peas), Hakurei Turnips with greens, kousa squash, zucchini, basil, spinach, plus I picked up some blueberries, strawberries, and tomatoes. That’s what’s great about the CSA. You can easily purchase more fruit or veggies to add to your bounty! 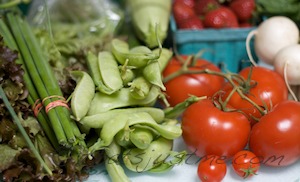 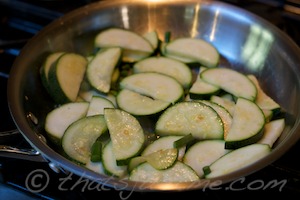 squash, cukes, basil, radishes with greens, scallions, spinach, beets w/ greens, lettuce. Beets are definitely one of my favorite veggies. I love the greens as well as the roots! 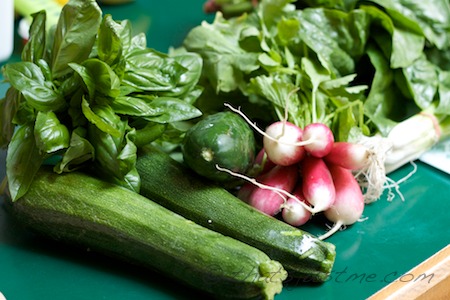 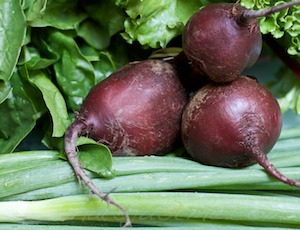 We were on vacation for week 5. My inlaws picked up our share, so I am not sure what was offered. But the newsletter stated: Beets,
Cucumbers, Radishes, Lettuce, Zucchini, Scallions and Basil

green string beans, lettuce, turnip, corn, spring onions, cuke, cubanelle & green peppers, zucchini squash, mint, corn on the cob. It was exciting to get corn on the cob, I ate all three ears by myself RAW! 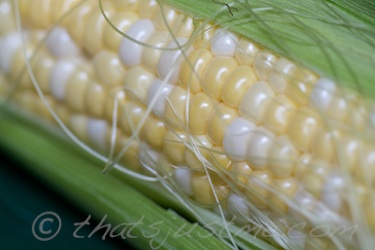 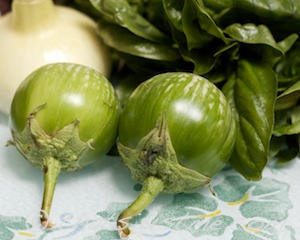 We were on vacation for week 8. My inlaws picked up our share, so I am not sure what was offered. But the newsletter stated that Sweet Corn, Assorted Squash, Bell Peppers, Cubanelle Peppers, Eggplant, Slicing Tomatoes, Basil and Scallions were scheduled for the share. 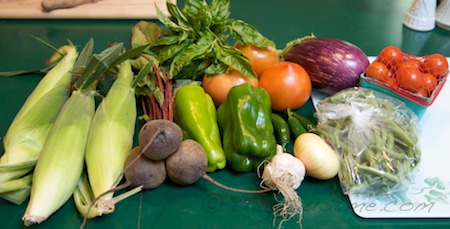 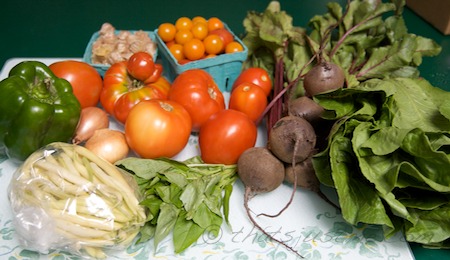 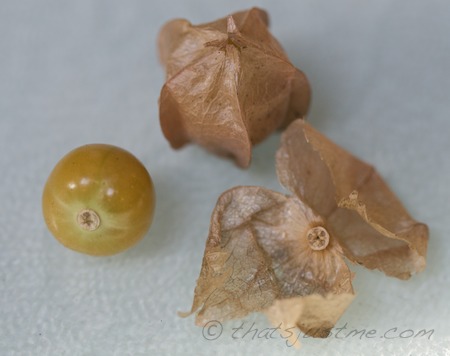 Another week on vacation. My inlaws picked up our share. The newsletter stated that Corn, Beans, Eggplant, Beets, Peppers, Cherry Tomatoes, Slicing Tomatoes, Basil and Onions were scheduled for the week.

poblano pepper, jalapeno peppers (as much as you can use), seconds tomatoes (as many as you can use), wax yellow beans, cherry tomatoes (or choose husk cherries), cilantro, zucchini squash, (traded baby eggplant for extra zucchini), corn on the cob, carrots complete with green tops (or choose beets), swiss chard, radishes with greens, escarole greens.

The carrots were so cool. I loved their natural rootie uneven shapes! 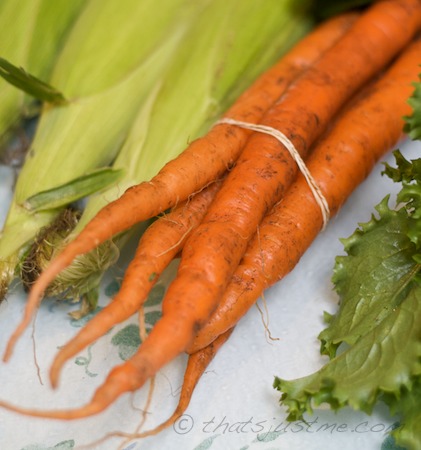 Tatsoi is one of my favorite veggies now, and I never would have tried it if it weren’t for my CSA share! 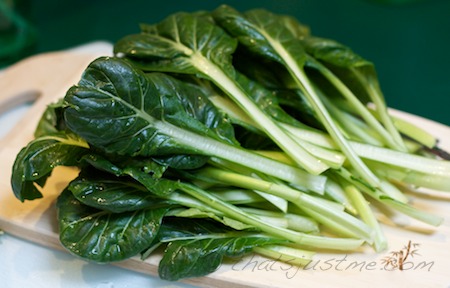 celery with greens, green beans, cranberry shell beans (traded turnip for more shell beans), lettuce (or choose bok choy or arugula), mint, serrano or jalepeno peppers (as much as you can use), poplano pepper (or choose other green pepper), zucchini (or choose other summer squash), tomato. 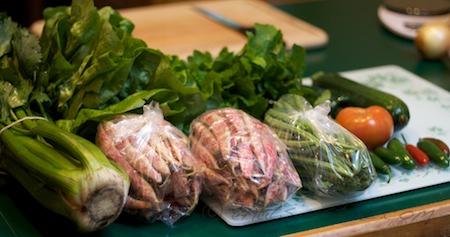 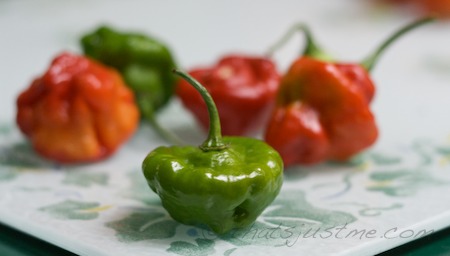 Green beans, shell beans, broccoli (or choice of cabbage), chard (or choice of tatsoi), green leaf lettuce, green peppers (choice of Cubanelle), scallions, green tomatoes, corn on the cob, aji dulce peppers (as much as you can use)

There’s nothing like broccoli fresh from a local farm! The little attached broccoli leaves are so “natural”! 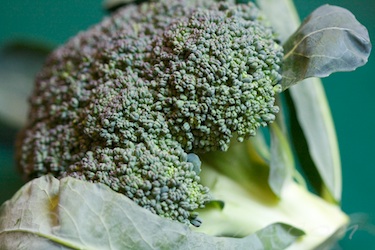 We received a huge batch of chard in a rainbow of colors. I blanched and froze it in a couple of freezer bags so we can enjoy it at a later date. Chard is delicious in soup! 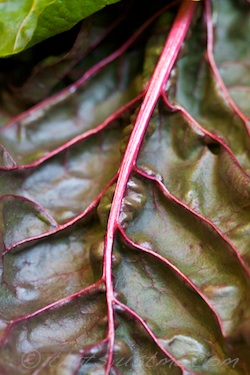 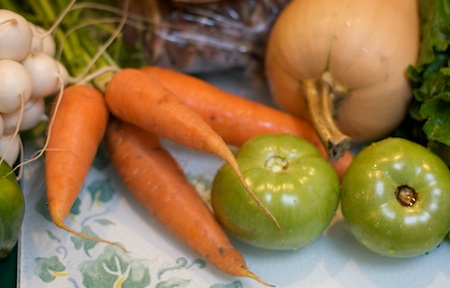 That night, I roasted the fingerling potatoes, green peppers, and red onion for dinner. Delicious! 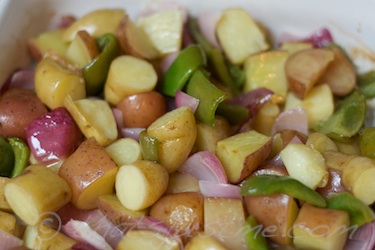 Now that the last share has been picked up, part of me is sad that it’s over but the other part of me is relieved. Yes, I would have loved to participate in the winter share, but I knew it would be too much food for just the two of us. Plus, I think I need a break from all the extra work. Organizing vegetables can be time consuming, and it’ll be a relief just to relax and begin eating the stock of veggies I put up in my freezer! I have enough shell beans to last through winter for sure! Yippee!

CSA In the Future

So, bottom line, yes yes yes, I will definitely be signing up again for the CSA at Farmer Dave’s next season. If you are nearby to one of the pickup locations, I highly recommend joining next seasons’ share. If not, then please check out http://www.localharvest.org/csa/ or your own state’s agriculture web site for a CSA near you. You won’t regret it!

I admit, in a few of the earlier weeks, I thought maybe the food was just too much for us to consume, and it was stressful, trying to get it all organized. I thought that maybe a trip to a farmer’s market each week might be a better fit. But soon I realized that the CSA was a true bargain, and besides that, we were supporting a local farm!

It comes down to organization and a commitment to take the time each week to plan your meals. If you don’t think you can use something within the appropriate time frame, then blanch and freeze it as soon as possible to retain freshness. Since most produce will keep frozen for up to a year, it’s possible to enjoy summer vegetables in the winter months!

I purchased a stainless steel blanching basket for less than $20 at Amazon and it made a world of a difference. Next year, I’ll be even more prepared.

For more info on blanching and freezing, check out the pickyourown.org web site. It’s packed with information. It’s also a great resource for canning and preserving.