Maria, my Facebook buddy, informed me that you can indeed freeze raw whole tomatoes…awesome!

I wish I knew this BEFORE picking up my CSA veggie share this week, as there was a “take as many as you can use” box of free “seconds” tomatoes that were bruised or gouged! I didn’t take any because I didn’t want to overload myself with too many tomatoes, as there were several already in the share. 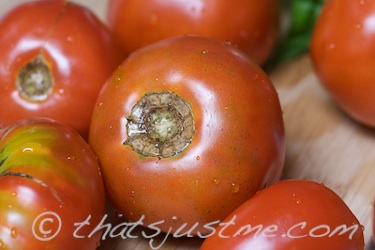 So, I googled, and it looks like you can freeze raw tomatoes either whole or in pieces.

I was dying to try this freezing process, so I went back to the farm today, and they had some “seconds” tomatoes in a bag for $3. I bought them!

I figured since there were some inedible parts on these tomatoes, I better stick with freezing chopped tomatoes this time, and in the future, I will try freezing them whole.

I chopped about 6 tomatoes and arranged them in a single layer on a small aluminum baking sheet pan and placed it in the freezer. I set my timer alarm for 1 hour. Once frozen, I transferred them gently into a freezer zip lock bag.

From what I gathered on a few articles online, frozen tomatoes are not for eating in salads. They will get mushy, so they should only be used for cooking. I am dying to make a sauce with them. I will update once I do.

I am getting interested in freezing, canning, preserving some foods this season. I found a small batch preserving book (The Complete Book of Small-Batch Preserving: Over 300 Recipes to Use Year-Round) at the library, so we’ll see how it goes. I might try it this year, or maybe next season. I would need to purchase canning jars, unless a relative has some. And also it’s important to use BPA-free covers too. We’ll see.

I used my first batch of frozen tomatoes while on vacation last week. Defrosted them briefly in refrigerator and used them in a ground beef, tomato sauce. Delicious! I didn’t bother running them under hot water to pull the skins off, as they defrosted in the sauce, I picked out the tomato skins from the pan. Not a big deal.

I will definitely keep freezing tomatoes! I hope there will be “seconds” again at the CSA pickup this week! I’ll grab some for sure!