I have been contemplating a new cast iron pan for awhile. Yes, I have many pieces of enameled cast iron and I love using them, but I wanted a real old fashioned cast iron skillet! I was so intimidated though. Would I be able to keep it from rusting? Would it be too much trouble?

While away for the 4th of July holiday this weekend we were browsing at a yard sale; We came upon a stack of cast iron skillets. Some cheap, thin ones from Taiwan and a couple of nice old pieces from Wagner. I am not an expert, but I know that Wagner is a good name to look for when looking for older cast iron. (Griswold being another brand.)

I found a 9 inch Wagner skillet, and as expected, it was rusted, but I figured now is as good a time as any to finally dig in and experience true cast iron.

So I asked how much. She said $8. Hmm, aren’t you supposed to haggle? So, I hesitated for a few seconds, and gave her a counter offer of $5. She said it was worth $8, but she’d take $6. My mind was racing. It sounded like a good deal, and even if it was a piece of junk, I’d only be out $6, so I agreed and bought the skillet.

We got home a couple of days later, and I started to google to learn all I could in a short amount of time. (My cast iron bookmarked links)

DH got out his electric swooshie sander thing-a-ma-bob, and lightly scoured the rust off of the pan to a smooth iron finish. Wow, this looked amazing! It has rings! So different than the rough bumpy cast iron sold in stores now. I am so bummed because I didn’t get to take a shot of what it looked like BEFORE in comparison to how wonderful it looked after!

I really wasn’t prepared for the skillet to be ready for seasoning so quickly, but it was probably good because it pushed me to google & learn as much about cast iron as I could.

Right after sanding, I washed with soap and water. It still had a black residue that rubbed off when wiped with a paper towel. (Note: after seasoning, it was smooth as non-stick, with no black residue.) The only oil I had in the house was olive oil, so I applied a thin layer twice, baking it upside down in the oven for a couple of hours on various temps from 250 to 350°

The following night, I cooked bacon in the skillet, then washed with hot water, wiping away as much of the gunk as I could. I dried it with a paper towel, then stuck it back in the oven for a few minutes. I then coated it with a very thin layer of coconut oil, and baked it upside down for an hour or so. After the oven shut off, I kept it in overnight.

So far so good. I really like cooking in real cast iron. It’s a lot different than I expected, I guess easier. I am glad I started with a nice older model, and not one of the new “pre-seasoned” Lodge or made-in-china cheapies. 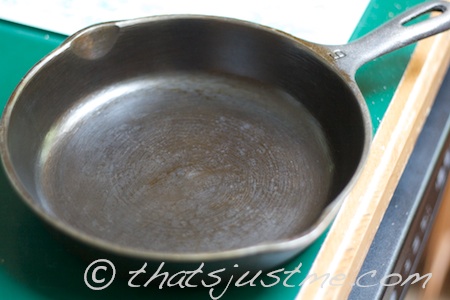 There are a lot of conflicting opinions on cast iron usage, but here are a few tips I learned:

Be careful when removing rust, don’t use aggressive sandpaper or sandblasting as it could damage it. I also heard that you shouldn’t use metal to remove rust, as it could interact with the iron, but then there are other reports that advise to use steel wool.
If the rust is more than 1/8 inch thick, then it might be too far gone to repair.

Don’t throw the pan into a fire to burn off rust or gunk. It can warp and ruin the pan. Same with heating it in a self cleaning oven. It’s too hot.

Some suggest it’s okay to use soap and water, while others warn never ever to use soap. From what I read, soap isn’t strong enough to bother a properly seasoned hard coated pan, as long as it’s dried properly afterward. But if you don’t need soap, then I suppose it’s okay to just use hot water.

It seems to be most efficient to cure/season with very high heat using an oil with a low smoke point, in fact, flax seed oil was highly recommended on this particular site because applied oils cause fat polymerization which is the process that creates the non-stick coating.

The article is fascinating, and offers an easy to understand explanation of how the whole polymerization process works. Read all the comments too. Very helpful and informative!

I might try re-seasoning in the cooler months with flax oil, but we’ll see how this first pan works first. Hey, ya never know, I might have found another old pan by then. I am looking for something maybe larger, like a flat griddle type pan.