(For Kitchen Bootcamp. The challenge this month is yeast bread)

I found a copy of the book “The Best Bread Ever: Great Homemade Bread Using your Food Processor” at the library. I was intrigued because he introduced a technique for mixing bread dough in a food processor.

The book is currently out of print (it was originally published in 1997), but there are used copies for sale on Amazon and you can also find the original recipe & specific instructions online if you want to try it.

I decided to try the technique today. As usual, I was nervous and hesitant, but I got all my tools and ingredients ready to go before I started. 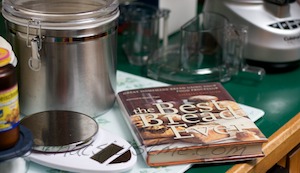 The instructions are not that difficult, but there are a lot of details and it’s intimidating because you need to run the machine for 45 seconds or until the dough reaches a specific temperature, and of course I messed up!

I felt very organized and confident at first! My dry ingredients were in the processor bowl, I had the water measured, and my iPhone timer was ready to start. I started the timer, and I began to pour the water into the bowl. After a few seconds, I looked over at my iPhone and realized that I had set it for 45 minutes, not seconds! OH NO! Crap! At that point, I lost all my composure and wasn’t sure how long I was processing. (Next time, I’ll use the stop watch for the correct timing!)

The dough didn’t look right, and unfortunately, the photos in the book were indecipherable. The photos were black & white and tiny. I had no idea how the dough was supposed to look, but it looked a little dry to me. Do I keep mixing as is or does it really need more water?

Of course by now, I was slightly panicked, and I decided to add a little more water and run the machine for a couple more seconds. The dough sort of got stuck to one side of the bowl and there was a goopy puddle at the bottom of the other side, so I stopped and scraped down the bowl, nudging the dough a little.

I ran the machine again, and it seemed better. The dough was moving around the bowl, picking up the excess water at the bottom. Twice, I stopped and used my instant read thermometer to gauge the temperature of the dough. It was supposed to be in between 75 – 80°

I should also mention that my food processor has a dough button (which slows the motor down slightly, so the dough doesn’t heat up as quickly). The author never mentioned anything about the dough setting, so I had no idea how it would affect the mixing process. For my initial mix, I set it on dough. For subsequent mixes, I tried the dough button both on and off. Next time, I think I’ll mix it with the dough button. 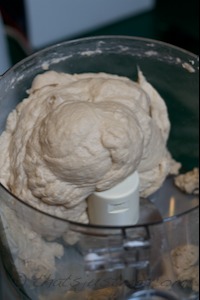 Eventually, the dough looked fairly normal, although crumbly, and the temp was 80° so I figured that I would try kneading the dough by hand for a few seconds. I dumped the dough on a floured board, and kneaded a couple of times. Ugh. I am so bad at this, and even though I had no idea what I was doing, it seemed like the dough was coming together alright, even thought it was very thick and heavy.

I stopped kneading and made it into a round shape, and plopped it into a large ceramic bowl. 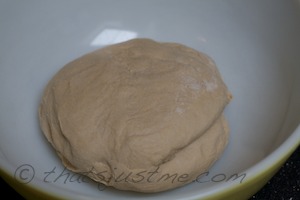 I covered with my large plastic Rubbermaid container and left it for about 2.5 hours. 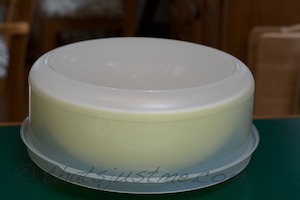 It was supposed to be left to rise for 1.5 to 2 hours, but I admit I got distracted and sort of forgot about it, eek, but it looked alright. The author reassured that the dough would not enlarge drastically in the first rise. 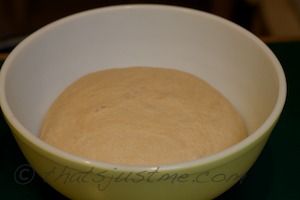 I transferred the dough onto the floured board, and shaped it into a loaf. I placed it into an olive oil greased glass loaf pan. 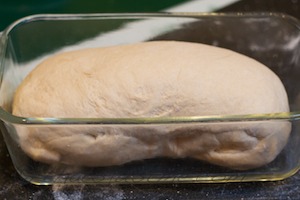 I allowed it to proof for about 40 minutes or so. 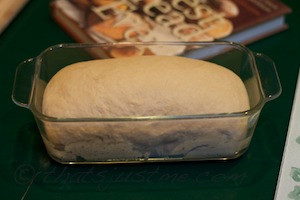 I preheated my counter-top convection oven for about 30 minutes, and the loaf baked at 400° for about 35-40 minutes. 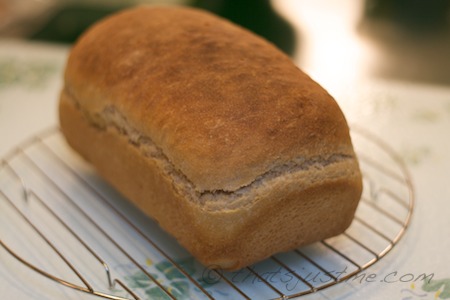 The bread has cooled, and I just ate a slice. It’s yummy. Very salty but the salt adds a nice flavor. It definitely has a nice taste, and the crumb is light in color.

The loaf was 28 ounces, which calculates to 14 servings @2 oz each. 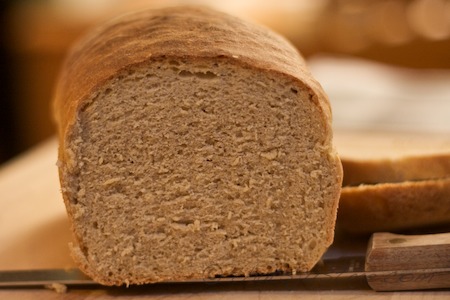 So my breadmachine is really being bad and just not wroking. I need bread though, so okay, I tried the Food Processor method again.

I should have just used one of my regular recipes, but I used the base recipe from the book, but used mostly whole wheat and partially white. It was okay. I always forget until after it’s spinning that I should get more water ready, because whole wheat uses more water. So, by the time I’ve added more water, it’s almost too late.

The dough was kind of a drag to work with too. I know I messed up royally, and it got stuck all over my hands when I kneaded a little bit. I’m just so bad at kneading. I don’t know why it intimidates me so much! Anyway, the bread came out pretty darned edible! haha. Tasty! I only used 1 tsp salt and no sugar. I added 2 Tbsp olive oil. I like the texture of the bread too.

I think next time I will try my tried and true recipes, and see if that helps the flour/water ratio.