Check the bottom of this post for nutritional data (calories, fat, sodium, fiber, etc) for the Master Recipe!

I mixed up my first batch of whole wheat “Healthy Bread in Five Minutes a Day: 100 New Recipes Featuring Whole Grains, Fruits, Vegetables, and Gluten-Free Ingredients” using the Master Recipe. Yes, it includes a bit of white flour, but I figured I will tackle the 100% whole wheat master recipe after I get a handle on the first recipe.

So, I measured the whole wheat flour and white flour using my food scale and poured it into a large 5.5 qt Rubbermaid brand plastic container. It’s a very wide container, and not that deep.

(Note: I was concerned that it wasn’t the right shape, so I posted a question over on the artisanbreadinfive.com web site and received an answer very quickly, that yes, that shape will work fine, in fact it’s what Zoe uses.)

I measured the vital wheat gluten, salt (used only 2 tsp vs 1 Tbsp suggested in recipe) and yeast and whisked all the dry ingredients together. I measured 4 cups of lukewarm water, & poured it all at once onto the dry ingredients. I started to mix everything together with a wooden spoon, and it became quite clear that was too dry. It wasn’t mixing well at all, so I added a bit more water, probably about 1/4 to 1/2 cup.

It finished rising, poof! It rose just about to the top of my container! I just now refrigerated it, so I’ll let it sit until tomorrow afternoon. We’ll see how the bread bakes. I’ll post updates!

Came home from work, and was excited to bake bread. I cut off a piece of dough using a serrated knife; actually it was two pieces, because the first chunk I sliced off was a little too small. I smoothed the second chunk of dough on top of the first piece.

With oiled hands, it was fairly easy to shape into a round form. I think the refrigeration helps. It’s still not as easy as normal bread dough, but it’s better than when I tried the “no knead” recipes in the past. Or it could be that I am gaining more experience, and I’m not as intimidated! Ha!

I put the dough on a piece of parchment, and placed that into my 2 qt cast iron pot. I covered it with a glass bowl and allowed to proof for about 90 minutes.

In the meantime, I started baking brown rice, so by the time the rice was done, my bread was ready to go in the oven. I didn’t bake as high a temp as suggested in the book, I used 350° – it baked in my COVERED pot for about 30 or 40 minutes (I really have to pay attention to time!); I took the cover off for a few minutes to brown a little and then put it back on so it wouldn’t burn.

I was using my smaller counter-top oven.

After it cooled, I cut a slice, and it was a bit too soft and “custardy” (not enough baking?) and the taste is a little ‘off’ – I am not sure I like this recipe as much as my normal doughs, but we’ll see. I have it baking in the oven for a few more minutes to see if it’ll affect the softy texture. I think I might understand why a lot of people were wanting less yeast in their recipes. If I do make a new batch of dough, I will definitely use less yeast. I wonder if that is what’s affecting the taste. Or it could be the lesser amount of salt (only 2 tsp in the whole batch) 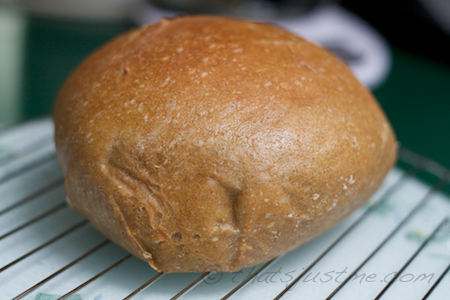 I baked my second loaf of bread yesterday.

As I said in my first update (above) I wasn’t sure I liked the taste of this particular recipe, and I think I have it narrowed down to a lack of flavor, which might be coming from the lack of salt. ?? I also have read a couple of reviews on amazon.com and they also complain about lack of flavor. But there are tons more reviewers raving about the recipes, so I won’t give up on it just yet!

The good news is DH is enjoying the bread, and that is a huge plus. I will mix up another batch next week. I still have one more larger (1.5 pound) loaf to bake from this batch. I think I will mix in herbs.

Anyway, for the second loaf (yesterday), I sliced off a larger piece of dough from the container. I gently flattened the dough on a greased plastic cutting board, then added some spices and seeds to the top. Cinnamon, poppy seeds, sesame seeds, ground ginger, and ground cloves.

I started rolling the dough, similar to what I did with 100% Whole Wheat with Caraway & Poppy Seeds but this time, I tried to tuck in the sides as I rolled.

I gently transferred the dough into my glass loaf pan, lined with parchment paper. I allowed it to proof for 1 hour & 45 minutes. The counter-top oven was preheated because I baked meatloaf right before I stuck the bread in.

I used my instant thermometer to make sure it registered 190° and it was done!

Today, I ate a peanut butter & jelly sandwich made with the second bread for lunch, and it was delicious. The spices and seeds gave it a flavor boost. 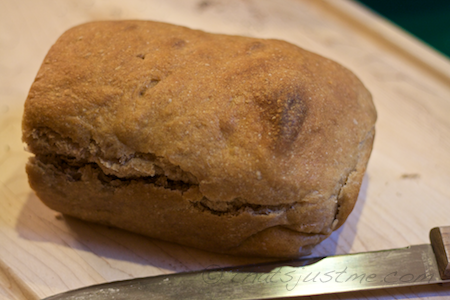 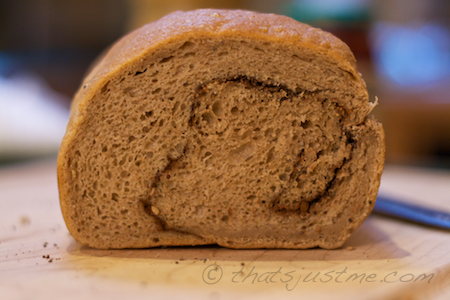 I did manage to calculate the nutritional info for a serving of bread using the Master Recipe. I estimated the whole batch totaled 69 ounces. The sodium is based on 2 tsp of salt.

One serving is 1 oz.

LAST UPDATE: I ended up tossing out the last bread I baked (compost pile). I just didn’t like the taste. I don’t think I will be making the dough again, at least for awhile. It could be that I don’t like the whole sourdough flavor.

Promo Video for Healthy Bread in 5 Minutes a Day