It was both positive and problematic, but I remembered “no failures, only lessons” – and I know I will get better next time with the lessons learned from this time.

I couldn’t decide which recipe to follow in all the books borrowed from the library, but I settled on “The Easiest 100% Whole Wheat Bread Ever” recipe on page 180 of the King Arthur Flour Whole Grain Baking book.

Since the King Arthur Flour staff praises the use of a bread machine, I was excited to try the “dough” setting on my Breadman Bread machine.

The recipe looked so easy, and I had all the ingredients, except for the orange juice, but it stated that water could be substituted. I took my time, making sure I weighed the flour and measured the water and molasses correctly.

I dumped all ingredients into my bread machine, set it for “dough” and watched it go. In the KAF book, on page 176-177, it stated to check the dough after 15-20 minutes, to make sure it looks smooth and elastic. I kept checking it regularly, and thankfully my sister was visiting, and we agreed that the dough didn’t look at all smooth; in fact, it looked soupy. Huh? I followed the ingredients’ amounts precisely. How could it be off so much?

I kept adding more flour little by little, until finally it looked smoother, and more “dough-like”.

Then I noticed the recipe summary/introduction (in italics) and I realized my error.

“Unlike most yeast breads, this one isn’t kneaded…”

Oh no, this was a recipe for no knead bread! Well, at least I knew why it looked so soupy.

Then I dumped the dough onto a lightly greased cutting board, and gently deflated and shaped the dough. I had my 2 quart Staub cast iron pot ready, (greased with olive oil) and I awkwardly tried to shape the dough and plopped it into the pot, ready for the 2nd rise.

On page 178, for the “Second Rise”, the book suggested using a large glass bowl for a proof cover. What a great idea! I found a glass bowl, and also kept a cloth wrapped around it, so it would keep warmer from underneath.

I sat down to eat dinner, and after a couple of minutes, I thought, hmm, maybe I should have smoothed it flatter for folding/shaping that way. So, I went back to my dough, plopped it back onto the cutting board, and flattened it gently with my hands, then tried folding it into thirds, then up and over the other way. It was still awkward, even though I tried to keep my hands wet with water. So, back it went into the pot again. And I covered it with my glass bowl and towel, and hoped for the best.

I decided to follow the instructions for the next recipe in the book, “100% Whole Wheat Sandwich Bread”, since that was more like what I was baking (and probably should have tried baking from the beginning). It was supposed to rise about 1.5 inches over the rim of the pan, in about 1.25 to 2.5 hours. Well, it only took about 1 hour or so, and my dough was pretty high. It started to droop a little over the edges, and I think that was due to the way I shaped it. I should have kept the folds “underneath” but instead I plopped it into the pan, with the folds up. So, I assume it was rising up and out, instead of just “up”. 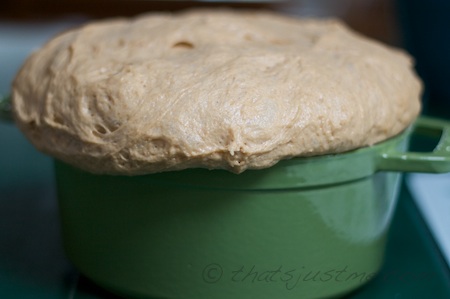 So, I preheated my counter top oven to 350° and I baked for about 30 minutes (I think – my memory is a little fuzzy). I took a look at the bread, and it was partially burned on top! eek. I took out the bread, found my meat thermometer and stuck it in the middle to check the temp. It rose quickly to 190° so I knew it was done.

I figured okay, I can just cut the burned parts off, no big deal, so I tipped the pot over my cooling rack, and uh, nothing. No movement. Oh no! Yep, it was stuck. I left it for a few minutes, hoping that maybe it would cool a little and let go. No luck. It was stuck!

I got out a plastic utensil thingie, and tried to dig into the edges to loosen them. Well, I got the bread out, but not really in one piece. ugh. 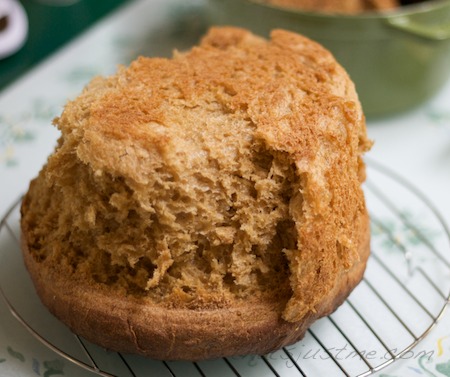 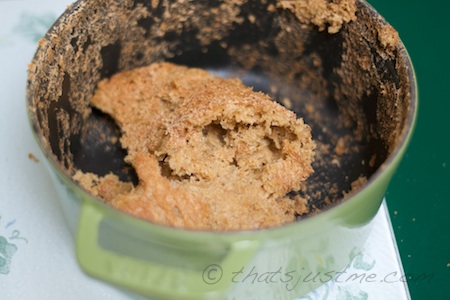 But I was happy that I could salvage a few whole slices from the wreckage. After I cut off the burned parts, I grabbed a chunk of the broken part, smoothed on some Olivio spread, and oh yes, it was delicious. Absolutely amazing!

I am psyched because even though I messed up, it really was great. I am looking forward to the next time!

Still reading my borrowed Bread books, and learning more and more. I am loving the “The Bread Bible” – learning about “autolyse” and how I could pause my bread machine after 3 minutes of mixing to allow for a 20 minute rest before continuing to mix. If my machine pauses for only 10 minutes, I will need to hit it twice for the full 20 minutes.

I am also learning about the different methods of raising dough (first rise). Either rise until doubled (1-2 hours or more), or the second method being to “turn the dough” every 30-60 minutes. Turning = stretching and gently deflating, then folding the dough.

“The more the dough is allowed to rise, the finer and more even the crumb will be”

And I still have the Peter Reinhart’s Whole Grain Breads book to dive into as well.

So much to learn, and it all sounds so much fun! I will eventually learn to knead by hand, but for now, I will use the bread machine to do all the hard work. I have no desire (at this point) for cathartic release from kneading dough!