Okay, after the semi-fiasco last weekend, I am determined to try to bake bread again, and succeed!

I chose the Walnut Whole Wheat Bread recipe (with my own modifications) on page 188 of the King Arthur Whole Grain Baking book for my experiment this weekend.

I had to forgo the nuts (since I didn’t have any pecans nor walnuts in the house) but I replaced with just under a tablespoon of dried rosemary – it was all I had left in my jar. After all was said and done, it was probably the perfect amount, because we eat a lot of nutbutter and jelly sandwiches, and any more rosemary might have been too overpowering.

Like last weekend, I used the dough setting on my Breadman Bread Machine. I was disappointed because there was no pause button on the machine. I was hoping to pause for 20 minutes to allow an autolyse, but it wasn’t possible.

The dough looked wonderful while it was kneading. So much better than the gloppy soup from last weekend. And it was so much easier to handle in my hands after the rise too!

My Modified Ingredients List for 100% Whole Wheat Bread with Rosemary:

The crumb looks great, only a little bit of crumb/crust separation. Not perfect, but close to it, at least by my standards! I am very happy with the outcome! And it really tastes great. The amount of rosemary really turned out to be perfect, not too overpowering for peanut butter and jelly sandwiches. I will definitely try adding the nuts next time. The possibilities are endless! 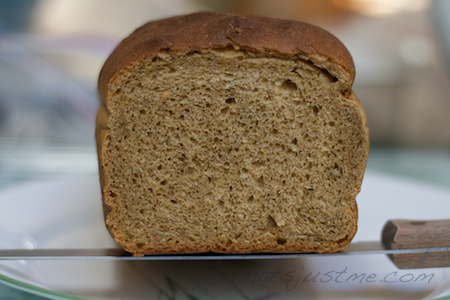