My Facebook friends were encouraging me to try this simple recipe, so I did a little bit of research online and I found a blog tutorial from Kaitlyn In the Kitchen, which gave me the inspiration and confidence to try it myself. (Kaitlyn found her recipe details at the Steamy Kitchen)

So, I started the process late yesterday afternoon. It was so easy to mix, almost too easy.

I covered the bowl with plastic wrap and set it on the counter. Our kitchen is a bit chilly so I was hoping it would still rise properly.

This morning, I peeked through the plastic, and it looked bubbly. Looking good.

When I returned home from work this afternoon (probably allowing the dough to set for about 21-22 hours), I got my work area organized. Getting out a large wooden cutting board, with some dusted flour. I also found my last remaining clean linen towel, laid it on the counter, and dusted it with flour. Okay, I’m ready. 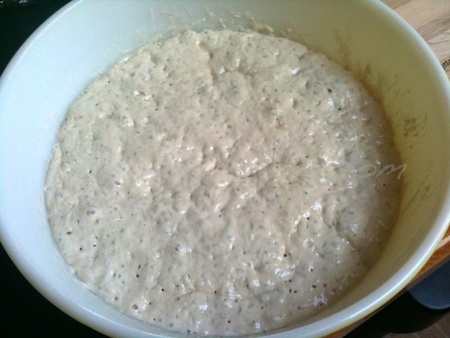 I took off the plastic wrap, and tipped the bowl so the gunky sludgy dough would slop out onto the wooden board. Slurp. Yikes, this dough was watery. I haphazardly tried to fold the slippery wet dough into itself, but it was just a sticky mess. Ugh.

So, I did the best I could, transferring the dough to the linen towel and folding the towel to cover it.

Okay, so while it was resting for the 2nd time, I tried to find some additional tutorials online.

I found another youtube video with more details than the original Bittman / Lahey video. Wow, his dough was much more workable than mine and I noticed how that he flattened the dough before folding. I didn’t do that. He also sprinkled more flour on top of the dough.

I also found another great article that offered lots of tips, one in particular that helped me understand why my dough was so watery. When I measured my 3 cups of flour, I used a spoon to scoop the flour into my measuring cup. Since, Lahey measured the flour by scooping the cup all at once, into the flour container, he probably scooped more flour than my method. The recipe I followed from the Steamy Kitchen did use less water than the original recipe, but I think the water/flour ratio was still a bit off, so I will know for next time.

Anyway, I decided to try to peek at the dough to see if maybe I could try the folding/molding process again. I unwrapped the linen towel, and it was a wet mess. It was stuck stuck stuck! Oh no!

I remembered I had a metal pastry scraper in my tools drawer, so I grabbed it and tried to transfer the doughy mess back to the wooden board. I had a heck of a time trying to scrape the dough, but unfortunately, a lot of it remained on the linen. Lesson learned!

I did manage to get most of the dough back to my well-floured board. Following the 2nd video’s instruction, I tried flattening/widening the dough a little; I sprinkled flour on top of the dough, and folded in thirds, and then back over from the other end.

At this point, I didn’t really have any additional clean linen towels, but I found the least fibrous towel and floured it very generously. I held my breath, sprinkled more flour on top of the dough, and transferred it using the pastry scraper. I folded the towel up over the dough, and set my timer for 1.5 hours.

At approximately 1.5 hours, I turned the oven to 450°, and placed my round 4 quart Staub cast iron pot to preheat for about 30 minutes.

Okay I was ready to bake, and I decided that I would try using parchment paper under the dough. I read comments from other bakers that had a bit of trouble with sticking, so I hoped that would help.

So, I unwrapped the towel. So far so good, doesn’t look like it’s sticking this time. Phew! I had a piece of floured parchment ready on the wooden board, and I dumped the dough from the towel onto the parchment. Thankfully, it let go fairly easily. I floured the top of the dough again, and I carried the parchment over to my 4 quart pot and dumped the whole thing in.

Phew, it was in the oven! I set my timer for 30 minutes, which at that point, I took off the cover. It was looking beautiful. 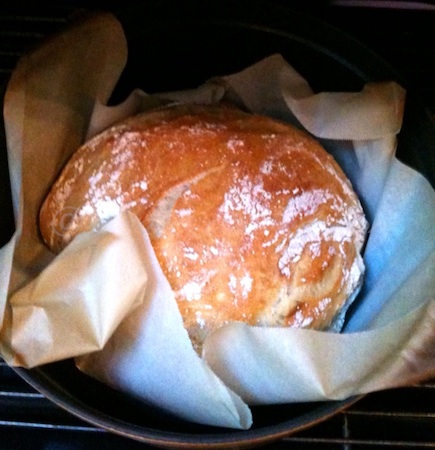 After approximately 15 additional minutes of baking (coverless) I took a peek. It was getting pretty dark, so I took the pot out of the oven. I picked up the edges of the parchment paper (which was very brittle and browned on the edges) and put the bread out to cool on a rack. 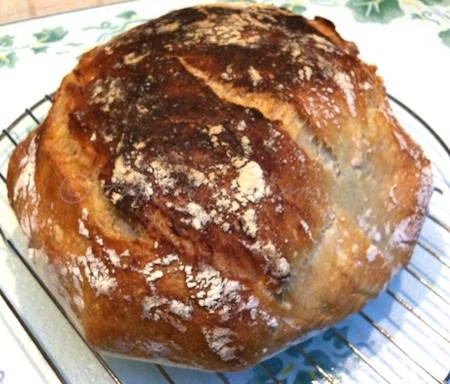 It really did look cool. All rustic and brown! We eat had about 2 ounces tonight with dinner (turkey chili) and it was delicious. Wow, how I missed good white bread. Yum! The only problem was, since it was so crisp outside and soft inside, it was difficult to slice with both of my serrated edged knives. I usually prefer a softer crust, but it was a nice change.

I definitely will be experimenting with healthier bread recipes. I found a couple whole grain no-knead recipes, and yay, two books I requested at the library are ready to be picked up:

The Laurel’s Kitchen Bread Book: A Guide to Whole-Grain Breadmaking

Artisan Bread in Five Minutes a Day: The Discovery That Revolutionizes Home Baking

Looking forward to learning more! I know I can get better at it. It just takes some planning and patience!